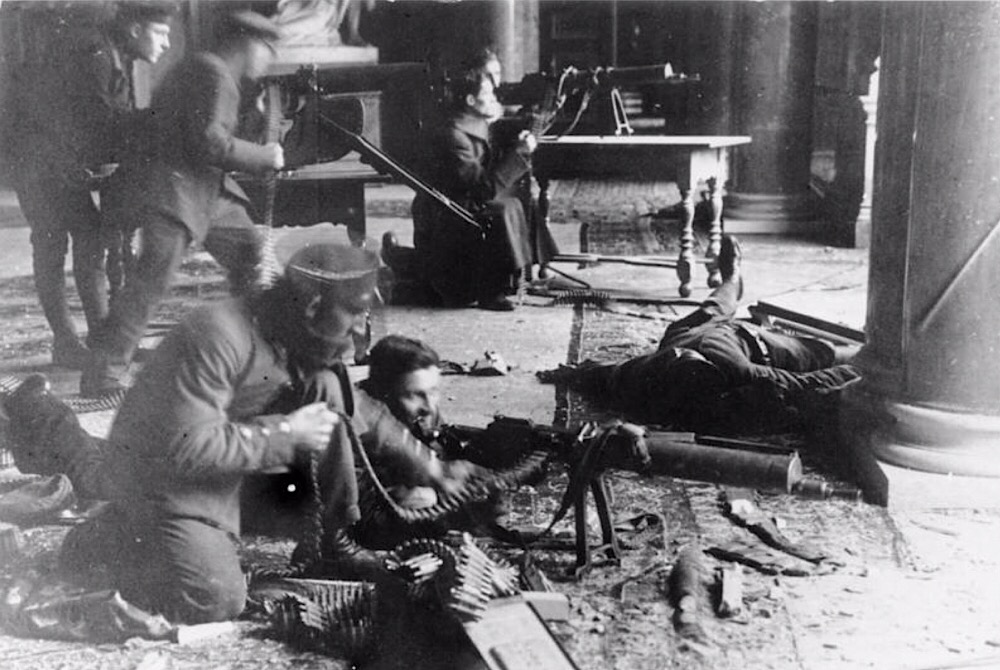 Many are the celebrations in Germany in 2019. Four centenaries and two seventieth birthdays are especially noteworthy.

1919 saw the birth of the Weimar Republic, the first true democracy in Germany. Women were allowed to vote for the first time in the election of the constitutional assembly. Seventy years ago the two post-war German states were proclaimed, the Federal Republic of Germany in the west, the German Democratic Republic in the east. The split was overcome with the GDR joining the FRG in 1990, an act we habitually call reunification.

1919 also saw the founding of the Bauhaus movement. Lots of celebrations are scheduled around that date! Also, check out our blog from October last year.

However, I would like to draw your attention to something not easily associated with Germany: a revolution! France, of course; Russia, yes; America, how glorious; but Germany?T he events actually started in November 1918, but did continue until the spring of 1919.

Here’s a short version of the story:

By mid-1918 there was little hope in Germany that the war could still be won. The suffering had gone on for four years and people were exhausted and starving. But in late October the German Naval High Command decided to send out the Imperial Fleet to engage in one last battle with the much superior British fleet. It would have resulted in a massacre costing tens of thousands of lives.

In this situation a mutiny began which was to bring down the German Empire in a matter of days. Seeing that the crews would not comply, the Naval High Command ordered the ships into the harbor of Kiel, a port on the Baltic. The workers in Kiel received the mutineers with jubilation and the whole town was in revolt. Within a matter of days, the uprising spread to other parts of Germany, first and foremost to the capital Berlin. 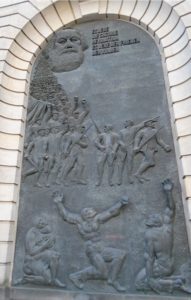 Relief on the former Royal Stables building. The inscription reads:
Long live the social revolution
Long live the peace among the peoples

On 9 November 1918 the Social Democrat PhilippScheidemann spoke to a crowd at the Reichstag, proclaiming the Republic of Germany and thus sending off the Kaiser (emperor) into early retirement. Just two hours later, Karl Liebknecht, a man who was later to co-found the Communist Party, announced the Free Socialist Republic of Germany from a balcony of the Hohenzollern palace, earlier seized by revolutionary troops. What ensued was a series of dramatic events, the interpretation of which differed and still differs in line with one’s political penchant.

In 1918, after the demise of the monarchy, an overwhelming part of the Berlin population tended towards a Socialist remake of society. However, there was no universally accepted notion on what „Socialist“ implies. The majority Social Democrats (SPD) were in favor of a slow transition, making sure that law and order prevailed. At the other end of the spectrum, the Spartacus League and parts of the Independent Social Democrats (USPD), stood for a Russian style revolution with a quick and ruthless change of the system. This discordance in the revolutionary drive resulted in compromises that left many influential adversaries of democracy in powerful positions and paved the way for the hostile takeover of Germany by the Nazis some fourteen years later.

The revolution didn’t end with the proclamations. Three months of meetings, strikes and demonstrations followed. In several bouts, the conflicts turned violent and these reoccurring outbreaks of fighting lead to ever more casualties. It was the Social Democratic government that prevailed, enlisting the free corps on several occasions, which earned it the reputation of siding with the reactionary forces in Germany. 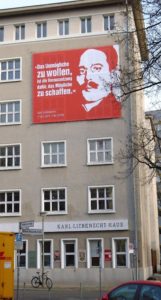 Karl-Liebknecht-Haus, today the HQ of the left-wing party „Die Linke“

The Communists, founded as a party in January 1919, therefore put the blame for the failing of the revolution entirely on the Social Democrats. Hence, these were perceived and fought as much an enemy as were the Nazis. The Social Democrats on the other hand, tried to preserve what had been achieved, supported by the Conservative Catholic Party (Zentrum) and the Liberals. This tripartite coalition is referred to as the „Weimar coalition“ and was especially stable in Prussia, the largest state within the Federation.

So whereas the Left was firmly and vehemently divided, the reactionary segment of society, dreaming of a reinstitution of monarchy or some other kind of authoritarian rule were solidly unified around one central myth emanating from the revolutionary events: The stab in the back.

What was this myth? The many firm believers in the invincibility of the German military were elated at the idea that their army had not actually been defeated on the battlefield. The soldiers, so the story, were instead brought down by the failing support from the homeland. Various strikes at home having caused a serious shortage of supplies which ultimately lead to the defeat. All the more galling was the notion that the strikes were politically motivated and set to overthrow the pillars of society. The Weimar Republic finally succumbed to attacks from both the far-left and the far-right.

So much for the historical events. Now how does all this translate into modern Berlin? Are there any traces? Rather few of the actual events, but quite a few of their later appreciation. 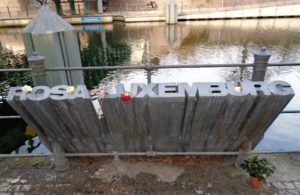 Rosa Luxemburg Memorial on the Landwehr canal in the Tiergarten 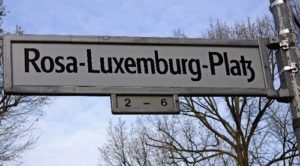 A square named after Rosa Luxemburg in the center of the city.

For Communist East Germany, the revolution of 1918/19 was a defining moment, after all the Communist Party was founded in this context. The leaders of the Spartacus League, Karl Liebknecht and Rosa Luxemburg, are still very much present in the eastern part of Berlin. Streets and institutions are named after them. The most striking presence is certainly the oddity of the State Council Building (Staatsratsgebäude), erected in the early 60ies to house the East German Government. Put bluntly: the portal doesn’t fit with the style of the building. Reason: it is largely a remake of the portal of the Hohenzollern palace from which Karl Liebknecht had proclaimed the Free Socialist Republic in 1918. 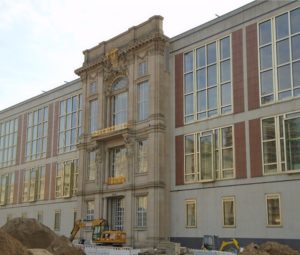 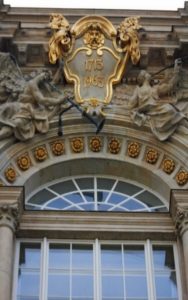 Detail of the State Council building: Cartouche on the portal

Currently there is lots to discover if you are inclined to delve more deeply into the past. Right up to the spring of 2019 there are a host of exhibitions and events centered on the 1918 revolution. For a comprehensive overview I recommend the exhibition „Berlin 18/19 The Long Life of the November Revolution“ in the Märkisches Museum in the city center. If you’re visiting Berlin and would like to know what happened in your neighborhood one hundred years ago, the 100 Locations map will provide you with sufficient information. 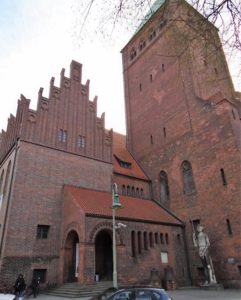 And, as always, if you enjoy the company of an experienced guide, don’t hesitate to contact us.

Posted by our guide